This is a special noodle dish in a prawn based soup. It's the soup that makes the difference, the sweet prawny essence with the spicy chilly sauce packs a kick. Now that beats tea and toast for breakfast anytime!

Now there is another Hokkien mee in KL that is a big noodle dish(tai lo min) fried with black soya sauce. But in Penang the prawn noodles is a signature dish. 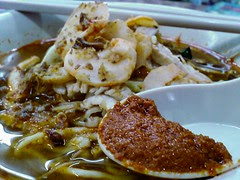 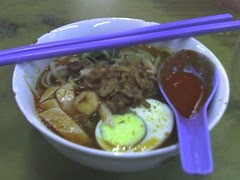 This is a special noodle dish in a prawn based soup. It's the soup that makes the difference, the sweet prawny essence with the spicy chilly sauce packs a kick.

Now there is another Hokkien mee in KL that is a big noodle dish(tai lo min) fried with black soya sauce. But in Penang the prawn noodles is a signature dish.

Hokkien hae mee (Hokkien/Fujian prawn noodles; 福建虾麺) is served in Penang (with a variant served in Singapore known as Hae mee). It is a dish of egg noodles and rice noodles in a fragrant stock, which is made from both fresh shrimp and dried prawns, as well as pork or chicken. Traditionally, small cubes of fried pork fat are added to the soup, but this is now less common due to health concerns. It is garnished with prawns, fish cake, leafy greens, pork ribs, squid, vegetables, crisp deep-fried shallots, spring onions and fresh lime. The dish is served with sliced red chili, light soy sauce and sambal.

In Singapore, Hokkien mee refers to a variant of the Penang version of Hokkien hae mee. The dish uses the same egg noodles and rice noodles used in Hokkien hae mee, but is stir fried and served dry. The main ingredients are shrimps and small pieces of sliced pork. It is usually served with lime and sambal chilli. 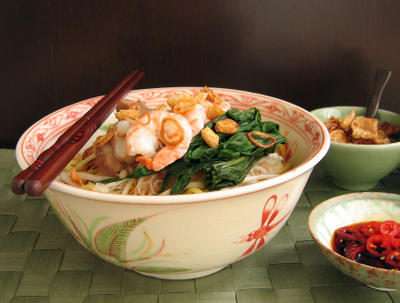 The secret to making a memorable Hokkien Prawn Mee Soup is in, as with most Asian noodle soups, the stock. My grandmother, who spent a good part of her childhood in Penang (to this day, I think of Gurney Drive's version as the definitive one), taught me that a properly made Hokkien Mee stock should be a deep ruddy brown even before the addition of soy sauce or palm sugar. The stock derives its rich flavour and colouring from prawn shells, patiently sauteed until well caramelized - not only is much flavour concentrated in the shells, but their carotenoid pigments contribute to the stock's characteristic burnt umber hue. Skimp on this step and the resulting stock will be anaemic in both flavour and colour. Whenever we eat crabs, prawns, crayfish or lobster, I hoard their throwaway heads and shells. Carefully cleaned, wrapped and frozen into packages, it means there's always a stash to call upon for amplifying any shellfish based stock, ensuring a brew sweetly saturated with shellfish flavour - as was the case when we decided to have Hokkien Mee last Sunday. A mixture of pork is also used to round out and frame the shellfish flavour - tail lends succulence and body, while meaty bones and ribs add flavour. The following recipe is my grandmother's - the only change I've made is to cook a separate batch of pork for topping the Hokkien Mee instead of using the meat from the stockpot, which tends to be tired, having given its best to the liquid.

Heat wok over high flame until very hot. Add oil and pork fat dice, which will release a lot of oil as it crisps and browns. Remove, drain well on paper towels, and set aside (to be used later for topping). Now fry the shallots in the same wok till golden brown. Remove, drain well on paper towels, and set aside. Turn flame down to medium-high. Stir-fry the pork ribs, bones, tail and chillies (in batches if necessary) till crusty and golden brown. Remove and place in a roomy stock pot. Set aside. Turn flame down to medium. Add prawn heads and shells to the wok, frying slowly until shells are crisp, caramelised and well-coloured. Remove and add to stock pot. Add water, salt, peppercorns, cloves, cinnamon, and star anise to stock pot. Bring to the boil. Turn down to a leisurely simmer. Simmer for 4 to 6 hours, until stock tastes richly flavoured and is the colour of tea. Add palm sugar and soy sauce to taste. Simmer another 30minutes. Strain stock. Set aside.

Prepare all the toppings and garnishes as described up to the red chillies macerated in soy sauce. Set aside in individual bowls. Blanch beansprouts and kangkong separately in a large pot of boiling water into which a tiny pinch of bicarbonate of soda has been added (this helps retain colour). Drain very well and set aside.

When ready to eat, blanch Hokkien mee and beehoon separately in large pot of boiling water. Drain well. Divide both into deep roomy serving bowls. Top with prawns, pork cubes, beansprouts, kangkong, fried shallots and fried pork fat. Bring soup to the boil. Ladle over each bowl of noodles and serve immediately. Let diners help themselves to the chillies and soy sauce. Alternatively, bring everything out on separate serving dishes for everyone to help themselves, including the hot stock in a large pitcher or bowl.

I have tasted sososoooo many stalls of Hockkien Mee in Penang.Only recently I found one stall is up to my taste and expectation.It is very good that I will eat this Hokkien Mee at least once a week. It!s cheap. You must try it with extra.... !paikut & Hooncheong! Woh! lovely and only RM4.50per bowl.This stall is at Paya Terubong,inside NAM SHAN COFFEE SHOP.If you come from Air Itam,it!s the last coffeeshop of the row of shophouses on your left immediately after rows of roadside hawkers.It operates from 5pm.

Thanks. Interesting write up on my favorite Hokkien Mee. I once have a favorite stall at Pei Mei Restaurant at Sg, Dua, Penang. Unfortunately the old man Ah How had an accident. The son asked to stop selling. Now I found a good one at Boo Boo Restaurnt at Lip Sim Garden. Be prepared to wait at least 30 min!

talking about prawn mee, sure the best is green house or the kopitiam behind jalan burma giant/ fomerly called FIMA or the one opposite padang brown (morning)

The stall in seng lee cafe near the pulau tikus balai polis, opposite the florist, the taste is not bad, authentic and cheap, highly-recommended

Could you give the recipe for the sambal for the prawn noodle? Thank you.