A classic Penang hawker food specialty. You have not tasted REAL char koay teoh until you have come to Penang. Penang CKT is the gold standard! 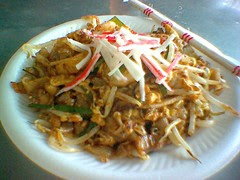 Here is another char koay teow I had. 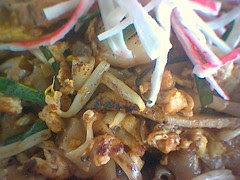 You can see the bean sprouts and slightly charred flat noodles.

This is the signature hawker dish of Penang. A simple plate of stir fried flat noodles with seafood, egg, bean sprouts, chilly and soy sauce.
Now anybody can fry noodles but it's that special combination of taste and spices that makes it so special.
I like the CKT in Bee Hooi coffee shop at night in Pulau Tikus. The Sister's CKT in Macalister road is overated in my humble opinion. 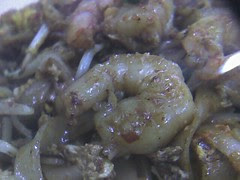 Prawns add that special kick to this special dish.

Char kway teow, literally "fried flat noodles", is a popular noodle dish in Malaysia and Singapore. It is made from flat rice noodles (called Shāhé fěn or hé fěn in Chinese) fried over very high heat with light and dark soy sauce, chilli, prawns, cockles, egg, bean sprouts and Chinese chives. Sometimes slices of Chinese sausage and fish cake are added. It is fried in pork fat, with crisp croutons of pork lard, which give it its characteristic taste.

Char kway teow has a reputation of being unhealthy due to its fat content. However, when the dish was first invented, it was mainly served to labourers. The high fat content and low cost of the dish made it attractive to these people as it was a cheap source of energy and nutrients. When the dish was first served, it was often sold by fishermen, farmers and cockle-gatherers who doubled up as char kway teow sellers in the evening to supplement their income.

HINT: Wok must be on high heat. To make it a truly authentic dish, cook and serve each dish individually. Use enough oil so the noodles won't stick but not too much or the char koay teow becomes greasy. You can also add 'kecep manis' or sweet soy sauce for added favour.

Makes about 6 servings. You can add in any vegetables of your choice, I find choi sum tastes best. 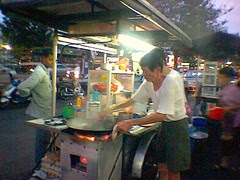 I like this uncle's CKT at Bee Hooi coffee shop in Pulau Tikus. He sells only at night and he will be busy frying the CKT while his wife naggs him all the time. He fries them individually so the CKT is not soggy. Recommended highly. 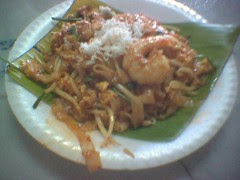 Mmm eating this now. But sadly not so nice already. A bit too oily and the servings small. 2 prefer the one in pulau tikus. Also very difficult parking. 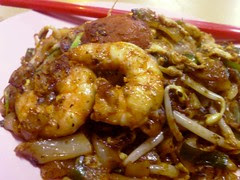 Halal Char Koay Teow
Originally uploaded by DrChan.
Last week I tried out this halal CKT in the junction to Leader Garden Apatments. Surprisingly nice even without pork. It is only at night from 8-4am.
Posted by Penangdoc at 6:14 PM

me too. IS quite torturing to know the good food without knowing the address. ;P

I totally agreed that Sister Char Koay Teow at MacAlister Road is overrated, serving size too small and far too oily. In fact, today I brought a colleague from KL with her sister and two relatives from Hong Kong to savour this famous Penang Char Koay Teow. Too bad, his sister succumbed to food poisoning and missed another famous Penang hawker food, the Loh Mee at Perak Road which all of them gave a thumb up. Poor sister purged and vomited all the way back to KL. May be she is allergic to oily food.

My wife too unfortunately had a bad experience with their unfriendly services a few years ago. I have read similar comments in Best Penang Hawker Good & Restaurant Guide Blog http://www.penangtuapui.com/

I can't understand why Penangnites and tourists still flock to this place when any other Penang Char Koay Teow is most likely to taste better and definitely cheaper. It's a shame to Penang that this hawker food is still listed in the Penang Good Food Guide. Or the Penangnites had lost their taste buds?

CKT was amongst the 'must eat' list of hawker food whilst in Penang. Ah Leng's Char Koay Teow along Dato Kramat Road (opposite Federal Place - formerly Federal cinema) is still the best. I decided to try the much talked about CKT in Lorong Selamat despite having heard from some friends who vowed never to ever patron the place ever again. Well, I should have listened to them. The CKT lady frying the koay teow was not only arrogant as claimed by many but downright rude to me. I told her that she need not have to be that rude and she suggested that I don't eat her CKT. As at today, I have joined my friends in boycotting her CKT.

Should boycott those rude hawkers in Penang. I personally think we should delist the Sister CKT as they are no longer tasty anymore.

Lorong Selamat CKT hawker is very arrogant. Have stop going there for many years. Rude, expensive and overly rated. Many other good CKT hawkers in Penang. Since we are paying, if hawker is rude, will not go there. Many other options.

Absolutely right about that Lorong Selamat CKT. Being a Penangnites, I have stopped patronising them for >10yrs. And I ALWAYS discourage my foreigner friends going there. We shouldn't be paying over-rated food with high price and yet have to suffer bloody bad attitude as a paying customer. STOP letting them earn your $ and stay arrogant.

I can see almost of the hawker's foods u recommends are at pulau tikus,so i guess u r working o staying in pulau tikus. i suggest u coevr more places, there r so many nice foods around other areas like jelutong, air itam and even bayan baru. This is kust a suggestion. no offence.

Agree that the lorong selamat CKT lady is arrogant. Anyway her CKT is not that nice. But there is another CKT store further down the road, by the man frying with goggles. Ingredients are always very fresh and not as oily as other places. He(or rather his dad who used to man the stall) is the original. Prices are similarly high though.

The Bee Hooi CKT is at the corner of Lorong Pulau Tikus/ Burmah Road Junction (near RHB Bank). This uncle's name is Ah Kow, I am 51 now and he had been frying CKY since I was a kid.Also try the the one opposite the Pulau Tikus police station.Yes agree with one of the comments not to confine your recommendations to Pulau Tikus, Perak Road and 3 Tio Lor (near Kwong Wah Yit Poh) also excellent.

Another "bloody rude" hawker is the beverage stall in Chulia street. I ordered the famous wan tan noodle and was asked to order drinks by a man (owner of stall). Told him I'll order later as I don't want my drink to be diluted. He told and old bitch (wife i guess) who is preparing the fruits at the counter and guess what, she swore vulgar words at us! wtf! We purposely didn't budge to irritate that ass further. They couldn't do anything except mumbling and swearing, but dare not do it directly at us, otherwise we'll surely throw the tables and chairs right at their face! Boycott this stupid stall, at all cost!