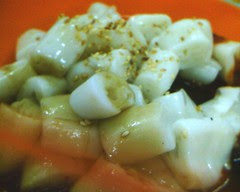 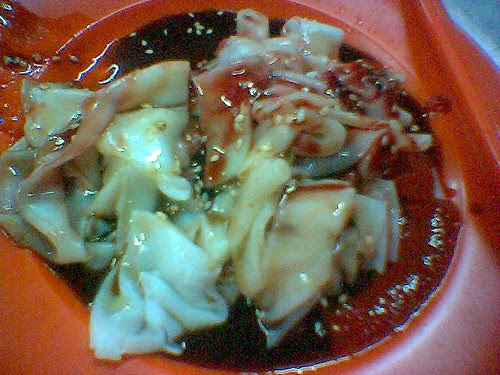 CCF needs a good stir to mix up the sauces
Chee Cheong Fan is a simple light meal. It is basically rolls of flat rice nodles eaten with shrimp paste, belacan and chilly with a sprinkling of sesame seeds. Innocent enough but the sauce packs a kick.

Where to eat ?
Most coffee shops have a stall seling it. The secret is the sauce which is mainly found in Penang. Most Rojak stalls will also have good Chee Cheong Fan. 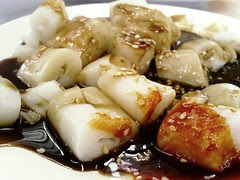 Ahh sometimes a simple plate of Chee Cheong Fun hits the spot. This was at Swatau Lane, the New World park coffee shop. Pungeont prawn paste and chilly sauce with a sprinkling of sesame seeds is all you need.

When I was growing up, ‘chee cheong fun’ was one of the foods I grew up eating. It is basically steamed flat rice noodles (about a finger’s diameter), cut up into little pieces and then served with a dash of sesame seed and sauce. Now, I can’t tell you what kind of sauce in particular because as the years go by, and when I began to venture out of my humble old town, I realized to my delight, that ‘chee cheong fun’ comes in different variations in different regions.

In my old town Taiping, ‘chee cheong fun’ comes with a rich dose of sesame and fried onions and a type of red sauce which is pretty sweet. The makers would usually add some chilli sauce alongside, to enrich its taste. Sweet is pretty blunt for a Chinese cuisine, you see. 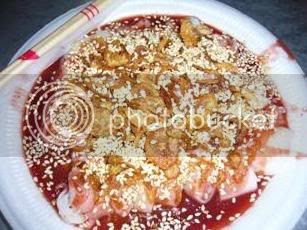 There’s another type of ‘chee cheong fun’ found here and pretty much everywhere else, called the Hong Kong ‘chee cheong fun’. Steam flour noodles, with shelled prawns and pork embedded in between. It usually comes with soy sauce as its gravy, topped with fried onions and again, sesame seed. 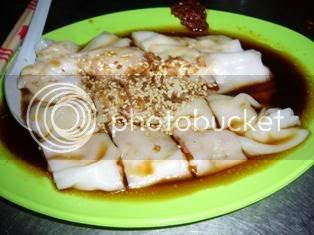 Then, found in central Malaysia, Kuala Lumpur’s ‘chee cheong fun’ is actually my favorite among all. Again, the signature steam flour noodles and sesame seed, the version here allows you to choose from a choice or steam or fried ‘yong tau fu’ to accompany your noodles. Garnished with fried onions as well, it is a great alternative to rice. 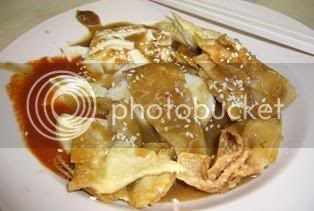 Way up north in the gourmet island of Penang, the ‘chee cheong fun’ here, is of sweet taste. Thanks to its sauce which is made up of chilli, rojak paste and peanut paste. Again, it comes served with sesame seed. 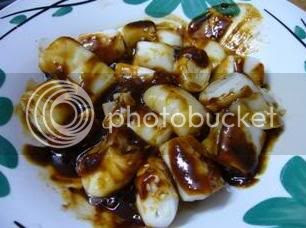 Posted by Penangdoc at 9:08 PM

Hmm.. There is a good Curry Mee stall in Seberang Prai near Raja Uda. You should try one day. =GreenLane.

Can Da Bau a not?

i click on mee-goreng but i keep reaching here

I will be in Penang in coming October, where is the best CCF with Yong Tau foo around Penang Road area.