Penang's tau sar peah is legendary and spoken of in the same breath as Kuala Kangsar's pau (dumpling) and Kampar's chicken biscuits.

Indeed, conversations about Penang food inevitably turns to the celebrated Penang tau sar peah. For Penangites who work outside the state (and even those who live overseas) and return for periodic sojourns to their beloved hometown, the tau sar peah is invariably among the items that line their bags when they depart.

Traditionally, the tau sar actually refers to the red bean paste found in the cookies. The red beans are cooked with sugar until they become mushy and turn a shade of very dark magenta. But given the several varieties of peah (biscuit/cookie) on the market, the term tau sar is also confusingly used to describe the whitish green pea paste, or pek tau sar. Then there's the mung bean variety, or lek tau and also lotus bean paste.

In Penang, tau sar peah is synonymous with Tambun peah as both are made from the same core ingredients, but differ slightly in shape.

Either way, you are assured of cookies that are delightfully mouth-watering and delicious.

When buying tau sar peah, try and get a batch that's fresh out of the oven. Although the cookies retain their freshness for several days without refrigeration, it is when they are still warm that eating them becomes an incomparable experience.

Although purists will tell you that the best tau sar peah is made with lard, there are equally tasty varieties made with vegetable oil. There is even a halal (permitted by Islam) variety for Muslims and a vegetable-based one for vegetarians. The best way to get fresh tau sar peah is to pre-order, sometimes even days before your arrival in Penang. 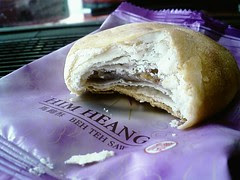 This morning I went to buy hot Beh Teh Saw freshly baked from Him Heang along Burma road. I just ate one and the sesame seed and onion filling just melted in my mouth. The biscuit is made in a special oven and the filling is made from wheat molasses, fried onion and sesame seeds. Very nice and a hot favourite for tourists to bring back as presents. I personally like the Him Heang one rather than the Ghee Heang brand as it is a bit dry. 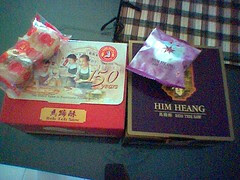 Ghee Hiang vs Him Heang
Originally uploaded by doctorchan.
These are the 2 famous makers of tau sar peah in Penang. These are traditional biscuits made with tillseed oil. I think Him Heang tastes better overall.
Posted by Penangdoc at 11:37 AM

i enjoy your blog. i grew up in singapore but now live in canada so i come to your blog to lau nua. thanks so much for your photos and bits of info, it brings back memories of goodies i missed.

My sis bought like 6 boxes to bring to Australia. I have one box at home...mmm tonight can have a few with coffee. Yum.

Born in Penang but working in KL, my trips home are not complete without buying tau sar peah for my KL friends. But during my last trip back during the school holidays, I had a bad experience at the Him Heang shop.

They were out of stock of TSP and my conversation with the staff went like this:-

Quite lengthy, but please bear with me)
me: 3 big boxes TSP please
staff: big one no more
me: (desperate) any small boxes?
staff: yes
me: Can i see how small? I need to estimate how many i need (I've never bought small boxes before, excuse me)
staff: flat one la
me: give me 6 la (being just as rude as him)
staff ignores me and turns to another girl who has just walked in standing beside me.
girl: do you have salty type TSP?
staff: No more
girl: What about other biscuits?
staff: yes, sweet one
girl: can I see them?
staff: all look the same la
The girl is now confused and does not know how to proceed. That's when i decided to cancel my order and walk out.

I went to Ghee Hiang's new place which is a nice white bungalow at the end of Macalister Rd with ample parking).

They were also out of stock but the girl in uniform kept apologising for being out of stock and asked me to come back after 2pm when they will have stock fresh from the oven. But I said I am driving back that morning - she even said "Have a safe trip"! She also recommended their famous sesame oil.

What a difference in customer service! I am definitely not buying from Him Heng anymore. Anyway, although Ghee Hiang TSP have less of "ewe chang" flavor they are less sweet & better for health.

PS: BTW the way you described the beh teh saw sounded more like pong peah (which Ghee Hiang has too)

yaa..agreed with the previous comment. i encountered rude staffs in him heang too. i personally like ghee hiang TSP better as it's more moist:) support ghee hiang!! him heang is just the imitation..

Both of you are absolutely right.

To be frank I did a research history on Tau Shar Pheah. And in fact, the actual Thau Sar Pheah is actually started by Ghee Hiang. If i'm not mistaken, one of the staff from Ghee Hiang ran and open a business of his own and he did improve the recipe from the original ones. Though Him Heang's taste better.

But Ghee Hiang's taste is original, they did improved a lot in customer service and they did lots of upgrades in infrastructure as well as plant and now even gain ISO certification in it's production.

It's just a matter of time Ghee Hiang surpass Him Heang. Ghee Hiang even opened a small stall along the same road as Him Heang to compete with them. The small Ghee Hiang stall even operate on public holidays. So people will start to forget about Him Heang and instead search for Ghee Hiang. Smart isn't it ?

Update..Ghee Hiang has expanded the small shop along Burma Road. Check it out for original tau Sar peah.....the best in Penang. From another Penang lang

Update..Ghee Hiang has expanded the small shop along Burma Road. Check it out for original tau Sar peah.....the best in Penang. From another Penang lang