Photo credit : Hko
Another dish not to be missed is Satay! They are like mini kebabs roasted over a charcoal grill and eaten with peanut dip and cucumbers and ketupat (a rice cake). There is a choice of chicken, beef, mutton and sometimes...intestines. Yum! 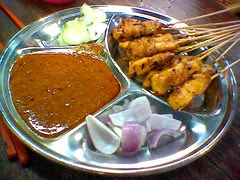 Sometimes a satay drowned in peanut sauce and speared with a crunchy onion and cucumber just hits the spot! 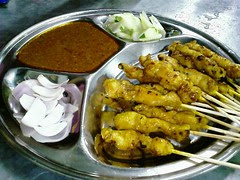 20 sticks of chicken satay, barbequed on a charcoal grill. Make sure you drown that satay in the peanut sauce. This is from Bee Hooi coffee shop at night in P. Tikus also. Costs 50 cents a stick. 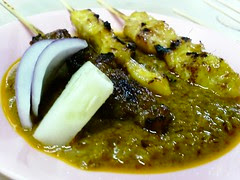 Ahh I just love downing those satays in the peanut sauce. Spear a few onions and cucumbers for extra zing. 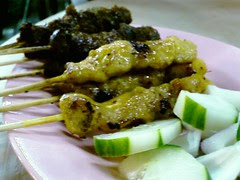 It was drizzling tonight but that didn't stop Penangites from a bit of supper. There is always a coffee shop open somewhere in Penang. This satay was excellent, tender and juicy. Next to the Dato Kramat market only at night.

Satay (also written saté) is a dish that may have originated in Sumatra or Java, Indonesia, but which is popular in many other Southeast Asian countries such as Malaysia, Singapore, Philippines, and Thailand, as well as in Holland which was influenced through its former colonies. In Malaysia, satay is a very popular dish especially during celebrations and it can be found throughout the country. A close analog in Japan is yakitori. Additionally, shish kebab is also very similar to satay.

Although recipes and ingredients vary from country to country, satay generally consists of chunks or slices of meat on bamboo or coconut leaf spine skewers, which are grilled over a wood or charcoal fire. Turmeric is often used to marinate satay and gives it a characteristic yellow color. Meats used include beef, pork, venison, fish, shrimp and chicken. Some have also used more exotic meats, such as crocodile and snake meat. It may be served with a spicy peanut sauce dip, or peanut gravy, slivers of onions and cucumbers, and ketupat. Pork satay can be served in a pineapple based satay sauce. An Indonesian version uses a soy-based dip.

Some allege that satay was invented by Chinese immigrants who sold the skewered barbecue meat on the street. Their argument is that the word satay means "triple stacked" (三疊) in Amoy dialect, and indeed, satay is often made with three flat lozenges of meat. Credence is lent to this view from the fact that satay in Malay has an older meaning of 'submission' as a verb, and there exists several dishes in typical Malay Cuisine that are heavily influenced by Chinese cuisine. Furthermore, satay is found in Malaysia, Singapore, Indonesia, Thailand and the Philippines, all countries with significant Chinese populations.

On the other hand, it is also possible that it was invented by Malay or Javanese street vendors influenced by the Arabian kebab. The explanation draws on the fact that satay only became popular after the early 19th Century, also the time of the arrival of a major influx Arab immigrants in the region. The satay meats popularly used by Malays and Indonesians, mutton and beef, are also traditionally favoured by Arabs and are not very popular among Chinese, which mostly prefer pork or chicken meat.

Posted by Penangdoc at 2:50 PM

Satay in Teluk Kumpar 'Hao You Seafood Restaurant' is the most delicious satay that i ever tried in Penang.

again u recommend bee hooi, p. tikus. satay is not penang's specialty. the best i had is haji samudari in Kajang, selangor but heard from my bro that there is one at d' piazza where they offer varieties' of choices like satay kuda, ostrich.... have u tried chinese's pork satay? its around P. tikus, ur area.

Eaton Satay the one located infront of Hans Coffee Shop opposite Lam Wah Ee Hospital is my all time favourite..I prefer satays with lots of lean meat but at the same time taste juicy and tender as well <3

Ahh yes I have tried the Satay sold there before.I must agree it still maintains its moisture and tenderness without any fatty chunk like most satay have