Penang is famous for it's Assam Laksa. In fact it's taste is unique to Penang because of the pungent Hae Ko sauce made of fermented shrimp paste and the bite from the sour pineapples.
Strangely enough I haven't had laksa in a long time so I don't have any pics yet, but I shall endeavour to eat some soon!
Laksa is also a big cause for gastritis and diarrhoea(probably why penangites don't eat it that often!)...so beware of where you eat the laksa from. The ones in Gurney Drive are not bad but are catered more for tourists. 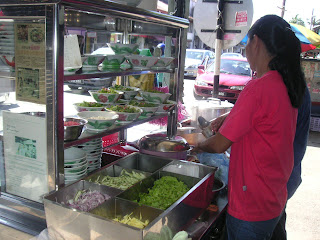 Strangely as a Penangite I don't eat much Laksa, but my friend from KL came so off we went to Balik Pulau for some famous Laksa. The shop we went to has been there since my friend was a kid 20 years ago. It's at the main junction of the Balik Pulau town. According to my friend, there used to be lots of rats and cockroaches around, but thankfully it's all been cleaned up now! It's a simple wooden shop with haphazard tables. 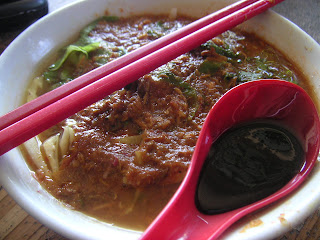 Now this is the real stuff, a good dollop of thick Hay Koo (Fermented Shrimp Paste) adds the zing to the Laksa. The laksa sauce is super thick and nice to the last drop. This one is the sour Penang Assam Laksa. What can I say, it's unique, the sweet and sour fish based soup really has a bite. Crunchy cucumber slices and tangy pineapple adds to the amazing texture of this simple, classic dish. 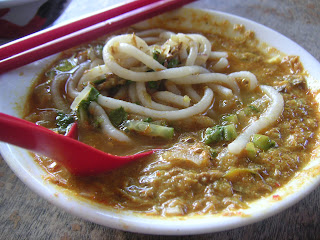 This is the Thai Lemak Laksa which has added coconut milk (santan) in it. It has a different taste, richer yet definitely 100% laksa taste. You really have to try both types to appreciate the difference. One more thing I like are the thick home made rice noodles which have a firm springy bite to it. 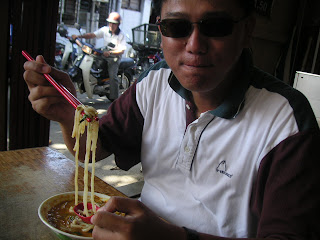 My friend started with one bowl... 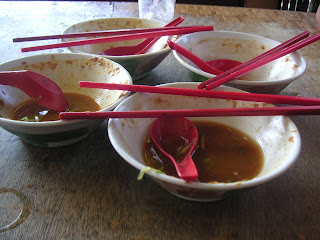 And continued to polish off 4 bowls of Laksa by himself....now thats really a classic Penang Hawker fare. 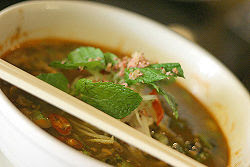 A bowl of Penang laksa, a variant of assam laksa.

Assam laksa is a sour fish-based soup. Asam is the Malay word for sour, but it is often used as an abbreviation for asam jawa or tamarind, which is commonly used to give the stock its sour flavor. It is also common to use "asam keping" also known as "asam gelugor", dried slices of tamarind fruit, for added sourness. Modern Malay spelling is asam, though the spelling assam is still frequently used.

Variants of assam laksa include:

A bowl of Curry laksa.

Curry laksa (in many places referred to simply as “laksa”) is a coconut-based curry soup. The main ingredients for most versions of curry laksa include tofu puffs, fish sticks, shrimp and cockles. Some vendors may sell chicken laksa which uses chicken instead of shrimp. Cockles are usually very commonly used in laksa and most vendors would add them into laksa unless customers request not to have cockles for hygiene reasons. Laksa is commonly served with a spoonful of sambal chilli paste and is traditionally garnished with Vietnamese coriander, or laksa leaf, which is known in Malay as daun kesum. This is usually known as "Curry mee" in Penang rather than curry laksa, due to the different kind of noodles used (yellow mee or bee hoon, as opposed to the thick white laksa noodles). The name "Curry laksa" is more commonly used in Singapore.With the popularity of laksa in Singapore, there are even more 'varieties' of ingredients like lobster laksa, yong tau foo laksa and even plain laksa, just noodles and gravy like the type found on sungei road

Variants of curry laksa include:

The general differences between curry laksa and assam laksa are as follows:

Oh boy, I couldn't have stumbled upon a much better source of information! This a wonderfully site about hawker fare. Thumbs up!!

Your welcome, it's just a simple site, but I am glad you find it useful!

Thanks for the info, it would be useful to me when I'm going to Penang this weekend.

Delicious memories for someone who now lives far away. Anyone have a good authentic recipe?

Yes I must say that this is a wonderfully site about the wonderful Penang hawker fare.

A thousand thanks from the bottom of my heart. Hope I can link this to my blog so that I can always remember all the good stuffs here!

talking about laksa, the best i had in penang is from balik pulau where u get to choose asam laksa or siam laksa. The one at the kopitaim next to the famous penang road 'chendol' is also good. But the best laksa i had is not in Penang, i had one in KL taman bahagia, PJ is the best.

Hi,i just want to share some thought with you ...If you are a Laksa Lover then Probably you may have tried the Rest and now it's time for you to try The BEST Laksa at BESS Kopitiam while you are here in Melaka,Malaysia.

BESS Kopitiam has been choosen as The BEST Laksa outlet in Malaysia year 2009 - 2010 by the General Public in the www.fabfood1malaysia.com

The best Assam Laksa in Penang is at Hot & Spicy Cafe, Jalan Air Itam main road, opposite Public Bank Air Itam branch, in front of the old Choong Nam cinema (now a church), just a few doors away from Shell petrol station. It's many times better than Air Itam laksa!!!!!