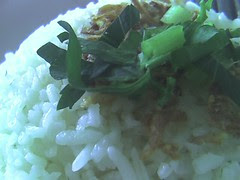 Rice is so essential to us here in Penang that if you don't eat some rice in everyday something does not feel right. So what better food to sell then Chicken Rice. Everybody loves chicken and everybody loves rice...here anyway so chicken rice is a sure find in any coffee shop in Penang.

It is usually served with roasted or steamed chicken, rice cooked in chicken stock plus a bowl of...you guessed it...chicken soup. 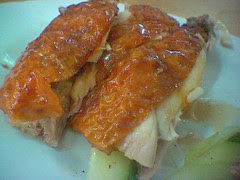 I always prefer the seo kay, or roasted chicken instead of the white steamed chicken. Has more flavour I think. 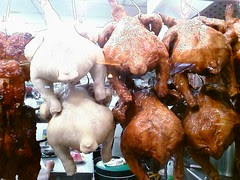 When you are eating Chicken Rice you can choose the steamed white chicken which has smooth flesh. Or you can have the roasted chicken. I personally like roasted chicken everytime.

Hainanese chicken rice (Simplified Chinese: 海南鸡饭, Traditional Chinese: 海南雞飯; pinyin: Hǎinán jīfàn) is a Chinese rice dish most commonly associated with Malaysian cuisine or Singaporean cuisine, although it is also commonly sold in neighbouring Thailand, and found in Hainan, China itself. So-called due to its roots in Hainan cuisine and its adoption by the Hainanese overseas Chinese population in the Nanyang area, the version found in Malaysia/Singapore combines elements of Hainanese and Cantonese cuisines along with culinary preferences in the Southeast Asian region.

The chicken is prepared in traditional Hainanese methods which involve the boiling of the entire chicken in a pork and chicken bone stock, reusing the broth over and over and only topping it up with water when needed, in accordance with the Chinese preferences for creating "master stocks". This stock is not used for rice preparation, which instead involves chicken stock created specifically for that purpose, producing an oily, flavourful rice sometimes known as "oily rice". Some cooks may add coconut milk to the rice, reminiscent of the Malay dish Nasi lemak.

The Hainanese prefer using older, plumper birds to maximise the amount of oil extracted, thus creating a more flavourful dish. Over time, however, the dish began adopting elements of Cantonese cooking styles, such as using younger birds to produce more tender meats. In another variation, the bird is dipped in ice after cooking to produce a jelly-like skin finishing, commonly referred to as Báijī (白鸡) for "white chicken", in contrast to the more traditional Lǔjī (stock chicken), also known as Shāojī (烧鸡) or roasted chicken. In Singapore, where modernity has made the maintenance and long-term storage of master stocks unfeasible, the meat is cooked by boiling in water flavoured with garlic and ginger instead, with the resulting stock used in the preparation of the rice and also in the accompanying soup.

The dish is usually served with several dips, including chilli sauce and pounded ginger. While it is common in Hainan to also offer a third sauce involving oyster sauce mixed with garlic, dark soya sauce is more commonly served in Malaysia/Singapore. The Malaysian/Singaporean version of the chili are also much hotter, reflecting its Southeast Asian influences, and may also involve a mixture of chilli with garlic. Most dishes are served with sliced cucumber, reflecting the Chinese preference for introducing some variety for a more complete meal.

Posted by Penangdoc at 4:58 PM

How much does the chicken rice cost? And where in Penang can you found it? Thks.

Dear Maya, chicken rice is very common and available in almost all
coffee shops in Penang. The main coffee shops along Pulau Tikus are not bad like Bee Hooi and Polycafe.

Surprise! the boiled chicken sold in Fountain cafe, lebuh carnarvon tasted so good but only available after 2pm.