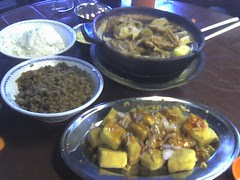 Had this for supper just now. Very nice on a cold rainy night. Bah Kut Teh is a Chinese herbal claypot stew which has pork, tau kua, mushrooms and even intestines. It is eaten with white rice or yam rice often accompanied by yu char koay.

Bak kut teh is a Chinese soup concoction popularly served in Malaysia, Singapore and also states of neighbouring countries like Batam of Indonesia and Hat Yai of Thailand. Generally it is cooked in a clay pot with various parts of the pig, varieties of mushroom, lettuce, and dried tofu sheets or pieces . The soup itself is a broth which consists of several herbs and spices (including star anise, cinnamon, cloves and garlic) boiled together with pork bones for hours. Light and dark soy sauce are also added to the soup during cooking, with varying amounts depending on the variant.

Bak Kut Teh is typically served in a steaming clay pot 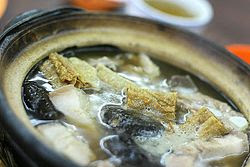 Another picture of Bak Kut Teh

Bak kut teh is best eaten with rice, and in Malaysia, it is often served with strips of fried dough called Youtiao. Soy sauce (usually light soy sauce, but dark soy sauce is also offered sometimes) is preferred as a condiment, with which chopped chilli padi and minced garlic is taken together. Tea of various kinds (the Tieguanyin variety is especially popular in the Klang Valley area of Malaysia) is also usually served in the belief that it dilutes or dissolves the copious amount of fat consumed in this pork-laden dish.

Klang, widely believed to be the home of bak kut teh, is famous for her many restaurants serving the best and tastiest bak kut teh in the region. Indeed, the dish is reported to have been invented in Port Klang for port coolies there in the early 20th century, to supplement their meagre diet and as a tonic to boost their health.

There are numerous variants of bak kut teh with its cooking style closely influenced by the prevailing Chinese enclave of a certain geographical location. In Singapore, there are three types of bak kut teh. The Hokkien, who prefer saltier food, use more soy sauce, which results in a darker soup. The Cantonese, with a soup-drinking culture, add medicinal herbs to create a stronger flavoured soup. The most common variant is the Teochew style, which uses more pepper in the soup.

A less fatty variation of bak kut teh made with chicken instead of pork is called chik kut teh. It also serves as a halal version of the dish.