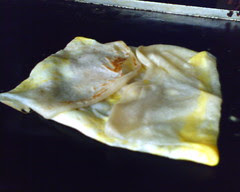 Indian Roti / bread with egg. A local favourite to be eaten with curry or sugar. 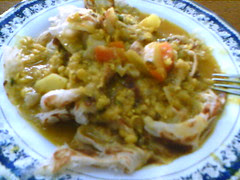 There are a lot of Mamak (Indian Muslim) coffee shops in Penang. Roti canai is cheap and can be prepared in many savoury and sweet ways. A local favourite is just plain roti canai drenched in Dhal curry. Eat it quick before it becomes too soggy!

Here's my roti canai store next door showing his skill at flipping the roti canai dough. This is important to trap air in the dough to make it nice and fluffy!

Another Roti Telor (roti with egg) in the making.

Roti means bread in Hindi, Urdu, most other North Indian languages, and Malay. The term "canai" derives from "channa", a mixture of boiled chickpeas in a spicy gravy from Northern India which it was traditionally served with. The term "channa" is also used in Pakistan. In English, roti canai is sometimes referred to as "flying bread," a term that evokes the process of tossing and spinning by which it is made.

The dish is composed of dough containing copious amounts of fat, egg, flour and water. The form of fat used is usually ghee (clarified butter). The entire mixture is kneaded thoroughly, flattened, oiled and folded repeatedly. It is then allowed to proof and rise, and the process is repeated. The final round of preparation consists of flattening the dough ball, coating it with oil and then cooking on a flat iron skillet with a lot of oil. The ideal roti is flat, fluffy on the inside but crispy and flaky on the outside. 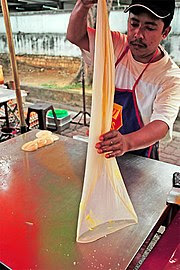 The mixture is kneaded, flattened, and then oiled, before being folded repeatedly. 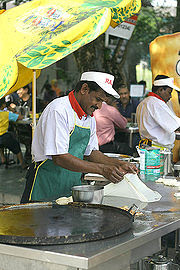 Another picture of Roti Canai making

The final presentation of Roti Canai on banana leaf

One of the characteristics of roti canai and its derivatives is that it can be eaten with the hands, without the need for utensils. This makes it a convenient dish to consume, while being filling. This characteristic makes it a dish of choice as breakfast or as supper (the fourth meal of the day, generally eaten after nightfall).

Traditionally, it is served with dal or 'dhal'(lentil) curry, which in North India is prepared in a similar to chana. It can sometimes be taken with sugar or condensed milk. More recently, various improvements on plain roti have been devised to suit the more adventurous tastes of more affluent Malaysians and Singaporeans. Generally the newer forms of roti are denoted by using a prefix of roti attached to the additional ingredient used. One of the most common derivatives is roti telur or roti with fried eggs (telur being the Malay word for egg). Other variations include roti tisu (tissue bread, a paper thin and flaky roti), roti bawang (onion bread) and roti bom (bomb bread, a smaller but thicker roti) also popular is the roti planta which is roti stuffed with margarine and sugar. It is also interesting to note that most plain roti are round while those with fillings are square in shape due to the folding of the roti.

the best is transfer road morning roti canai, but be careful, some times its dirty coz i was complaint in the newspaper some years ago there r shits in the roti canai because when they rub their ass after doing their biz in the toilet but the shit was on the ring n they r not aware.