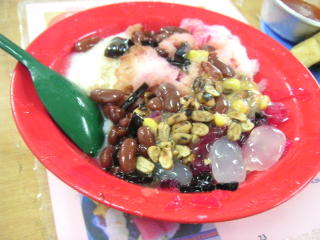 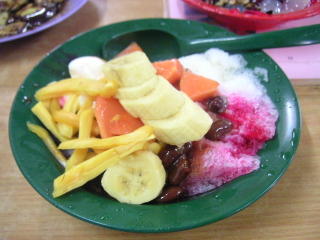 Air Batu Campur (ABC in malay it means mixed ice) is fantastic as a desert on a hot day...which is everyday here.
This in my opinion is the best Ice Kacang in Penang, in Swatau lane. The speciality is the extra fruits you can add in ... jackfruit (nangka), papaya(paw paw), bananas, etc. Really hits the spot on a hot day.The top picture is without the fruits, the bottom one has fruits covering the already plentiful ingredients. Please don't think the stuff you eat at the hotel is a real ice kacang till you have tried this! And it costs only 3 ringgit for the works! 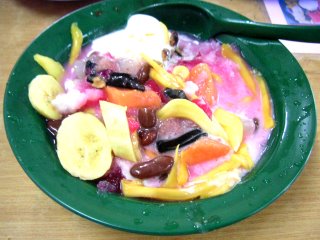 This is my favourite ice kachang place, just behind the Giant supermarket along Burma road. You can add extra fruits like banana, jack fruit, papaya and mango which makes this a very refreshing desert.

A Spoonful of Ice Kachang A Spoonful of Ice Kachang, originally uploaded by tidaknama.

Helps cool you down. Surprisingly you can get a very nice bowl of Ice Kachang at the Gurney Plaza food court for only rm3.

Ice kachang (Chinese: 红豆冰; pinyin: hóngdòu bīng; literally "red bean ice"), is a dessert served in Malaysia and Singapore. It is sweet-tasting and is ice primarily served with sweet flavoured syrup and jelly. The word Kacang (note that Kachang is an old spelling) is a Malay word for bean.

Formerly, it was made of only shaved ice and red beans. Presently, it generally comes with bright colours that often is said to sparkle on the ice, and with different fruit cocktails and dressings. Several varieties have also been introduced which contain aloe vera in some form or another, such as in jelly form. Often, a large serving of attap chee (palm seed), red beans, sweetcorn, grass jelly, cubes of agar agar and chendol form the base. Evaporated milk is drizzled over the mountain of ice. To cater to the palates of the modern customer, some stalls have even introduced novelty toppings like durian and chocolate syrup. There are also versions that shun the multi-coloured syrup and are served with just a drizzling of gula melaka syrup instead.

By tradition, all food courts in Singapore generally have at least one stall purely for desserts that would sell ice kachang by default. Ice kachang tends to be patronised by tourists and locals alike.

Posted by Penangdoc at 2:46 PM

Hi, do you know the biz hours of the ice kacang stall at Swatau Lane? Thanks.

I think they are open from 11am to 9pm. They have moved to the New World Park coffee shop.

Swatau Lane ice kacang is not considered the best one in Penang.

It's special because of able to add fruits in it. The syrup they used too red and artificial.

The best ice kacang I ever had is in the food court of Padang Kota Lama field. The one near the car park opposite the Imigressen Office. Also try the coconut shake with ice-cream, super duper yummy

Nice ice kacang! I like this with brown sugar sauce.

Nice post. I learn something more difficult on completely different blogs everyday. It is going to always be stimulating to learn content from different writers and follow a bit of something from their store. I'd desire to use some with the content on my weblog whether you don't mind. Natually I'll give you a hyperlink on your web blog. Thanks for sharing.

I feel like to take some after seing your picture :)

It looks so delicious, I want to eat that.

A very insightful information and it very helpful. In case need some info about tangki fiberglass. Thanks for sharing.